Story of The Elephant and The Ant

Story of The Elephant and The Ant

Number of Character: 3
Most suitable for ages: 4-7

This is a simple tale of an arrogant Elephant and a self-respecting Ant. While this is an original story, there actually exist many versions of similar stories of arrogant elephants. In some of these stories, animals get together to kill the elephant by making it drown in a swamp, in others elephants are convinced by the Mice to not kill them by taking another path.

But here, the story features a single elephant and an ant, and later in the story, an experienced mother ant has been introduced. None of the characters are dead or mortally injured, which makes it suitable for young and/or sensitive kids.

The author’s son at the time of creation of this story, in particular, didn’t like it if the characters ended up dying, while injuries or punishments were fine. Each little one’s perception is different, and thus parents as storytellers should be aware and should ideally recite their own, modified version of even the famous stories.

Once recited, the moral of this story can be used by parents to remind the kids now and then to be kind to other little kids, or little creatures. Remember, the compassion you induce in them will later define their reactions, interactions and thought process — their whole personality.

Moreover, the story has some dialogues which should be recited with a lot of expressions for the right effect. You kids would enjoy a lot if you act scared, angry etc. according to the characters.

So without any further adieu, here is the story. 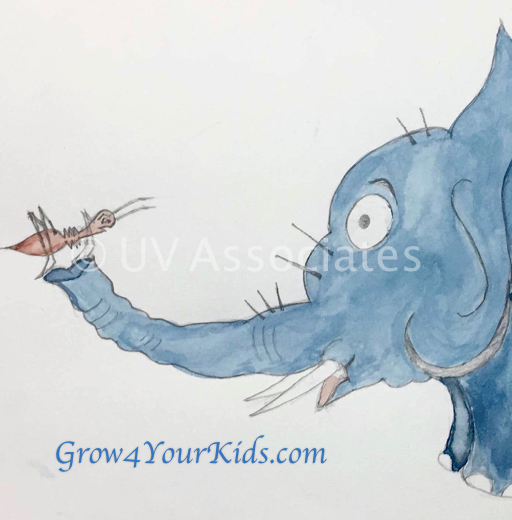 The Elephant and The Ant

Once upon a time, there lived a large elephant in the jungle. It was magnificent and very arrogant. There also lived a small ant in the jungle, who was full of determination and self-respect.

One day, the elephant was about to step on the ant, the ant shouted, "Mr elephant, please stop, don’t crush me to death!"

The elephant was annoyed and yelled on the ant, “How dare you come in my way? Get lost!”

The ant was very upset, she went home crying. The mother ant said, "What happened to my child?" Little ant told everything. Mother ant got very angry, "The elephant must be taught a lesson ", she said.

The mother ant followed the little ant to the place where the elephant was resting. She quietly climbed inside the trunk of the elephant and started biting. The elephant howled in pain.

"Help! Help!"  The mother ant scolded the elephant, "Do you now realize how it feels to be hurt and humiliated?"
The elephant apologized, "I'm sorry mother ant, I'll never be rude to small creatures."

The moral of the story is, Always be kind to smaller, or weaker creatures. 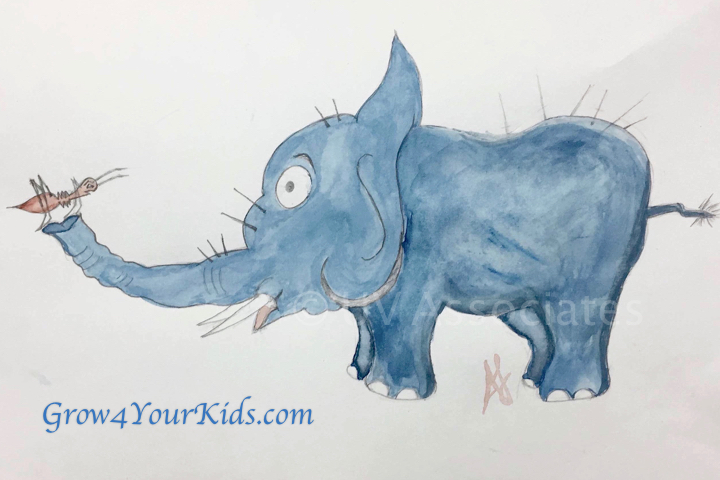 A Note from the Author

This story was specifically written for recitation by my 3.5 years old son in a classroom activity. And thus is has few characters, and is very short in length. He enjoyed the story a lot and especially loved it when the Elephant shouted for help. It was interesting to see, that even at such young age, children have the concept of retaliation and like it when Karma comes a full circle.

Premium Fonts for Free @TheHungryJPEG.com -- Only for a limited Time!

Also @Pixelo.net Hurry Up, Grab them before they are all gone!