Parent's a Liar, What's on Fire?

Parent's a Liar, What's on Fire?

If the parents lie in front of their kids, what’s on fire -- what’s in danger exactly? Turns out there is quite a lot.

In general, we come across many incidences where parents were lying in front of their kids. The consequences of such oversights when it comes to parenting have unexpected dimensions.

Let’s check out a few of them with real-life incidences, marked as “Scenarios” in the following text. They are snapshots from typical contemporary parenting. Maybe, some of these are eerily familiar. 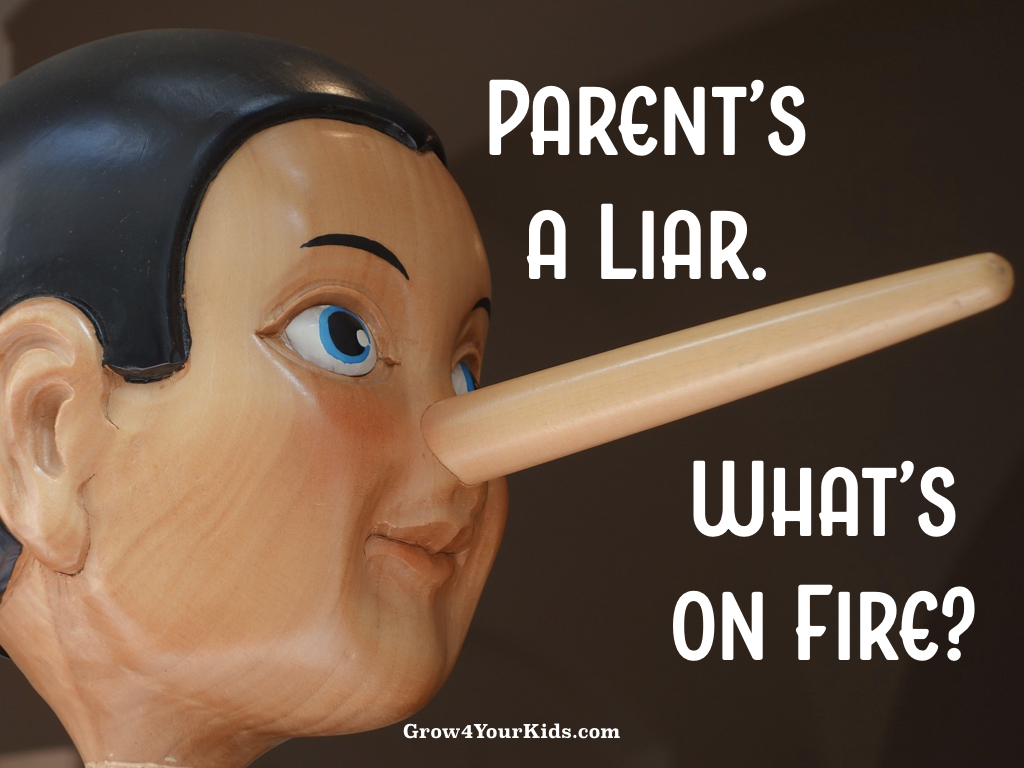 Scenario 1: A toddler is playing his or her heart out, outside the house, and is bluntly refusing repeated instructions/requests to go inside. The mother is telling him or her, to distract him or her, “Come on, let’s go inside, your dad has/will come.”

While the dad (or elder sibling) is not going to be home for hours. We observed that in one such case, the toddler --- who believed his mom and went home to find it empty -- completely stopped responding to his mother’s pleas in a few weeks.

A child places absolute trust in a parent, provided we do not give her or him a reason for not believing in us. When we lie to them, initially they feel betrayed. But over a period of time, their minds adjust to this new circumstance and as a result of it, they stop believing us.

Scenario 2: A mother telling her child on a daily basis, “Finish your lunch, else the dog will come.” She obviously hasn’t appointed a scary, monstrous dog to comply with her empty threat.

We have observed a particular child who started challenging her mom to indeed call one so he could check if she was telling the truth. He also started to question and confirm twice, thrice if she promised anything, and it definitely became embarrassing in front of others. The mother clearly lost her child’s trust. 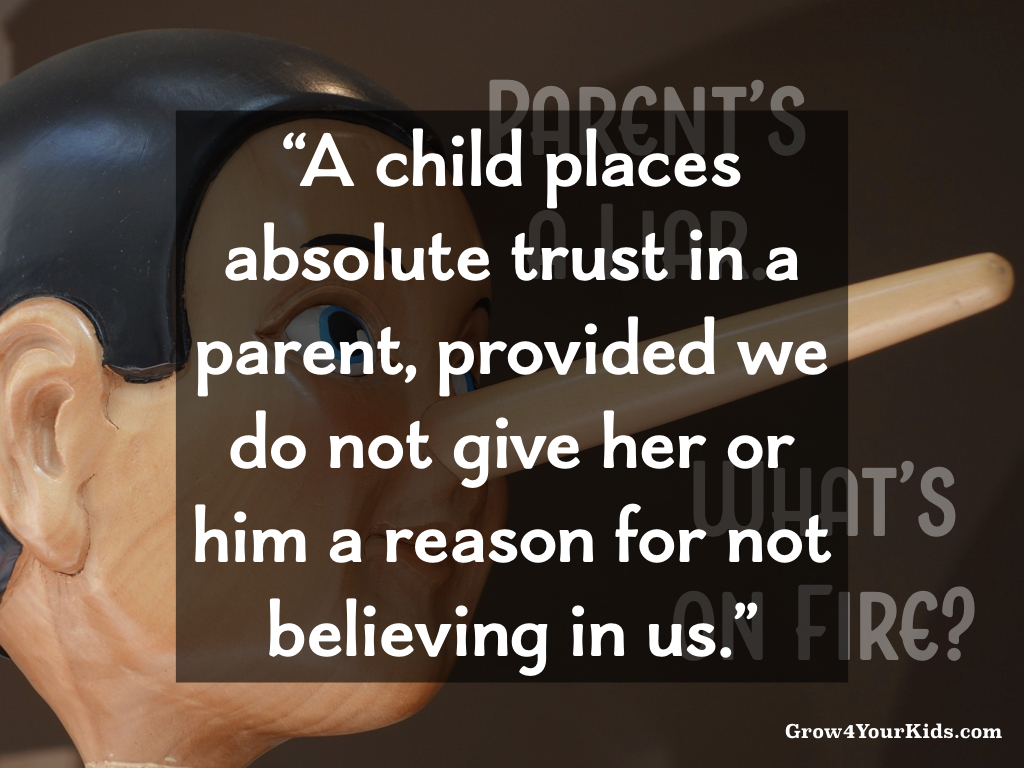 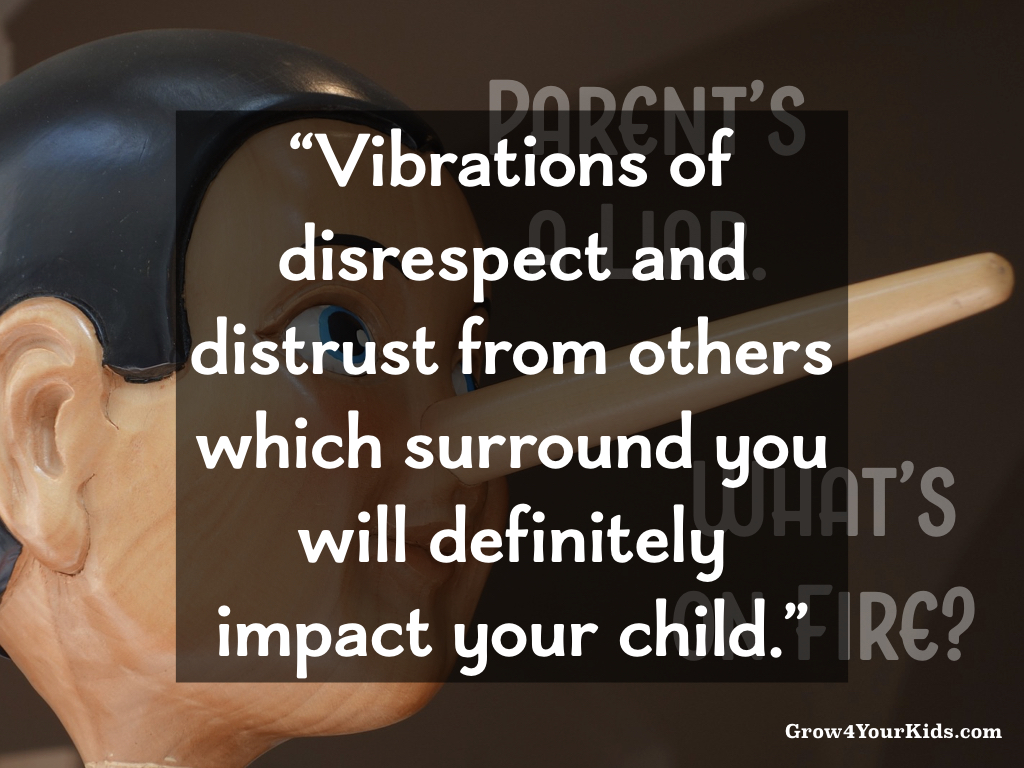 2. Root Cause of Life Long Fears

Another impact of incidences like “Scenario 2” is deep-rooted fear which an individual might not be able to get rid of. We try to instill the fear something unknown and think that it is going to be temporary, but some children might even develop unreasonable fear of canines, or scary men with big sacks meant to kidnap children, or whatever it is that you use to scare them in order to do your bidding. You might want to read another post which talks about “A Horrible Punishment”. While we do not mean the “lie”, the child might get really scared.

Social lies are part and parcel of social life. Sometimes you find yourselves giving compliments when you don’t really mean them, making excuses which could be far from real reasons just for not hurting others. All this is not always avoidable, and of course, this is not an ideal world. Children, with time, start to accommodate and acknowledge the harmlessness or the charitable intentions behind these lies.

But at times, we lie in front of our kids for quite selfish reasons. Let’s check another real-life incidence.

Scenario 3: Sasha wanted to borrow a toy which belonged to neighbor’s little son Pete who was a few years older than her own two-year-old, Mark. Mark had the habit of knocking the doors of all the neighbors on the same floor, especially Pete’s, as he was always interested in checking out if Pete was available to play, or if he could get hold of a toy car.

One such day, after repeated knocks were not answered (which was on Sasha’s request — she had earlier asked neighbors to not respond to Mark’s knocks, instead of stopping Mark from disturbing others) Sasha finally rang the doorbell. When her neighbor opened, she lied, “I’m sorry, but he pulled me out from our house and forced me to press the Doorbell button.” Coincidently, the neighbor’s domestic help had been checking the lobby from the video camera due to all the knock-knock commotion and knew that Sasha was lying. Now, maybe the neighbor would mention it, or would not mention it at all, but such fibs with silly, petty agendas when caught, might cost you your friends’ and loved ones’ respect, and on top of that, imagine this happening right under children’s acute observation. Mark might look little, and might not be capable of coherent sentences, but he has an understanding of the concept of a coherent lie, told for even a non-coherent reason. Then there are vibrations of disrespect and distrust from others which surround you, and will definitely impact your child.

To top everything, if the person who has caught your lie, is instead of being — a typical sensitive, ‘it would not look nice, so let me not mention it’ kind of person — is a mean, let’s demean this individual, s/he might be vocal either in front of you and or kids, or others. In any case, your kids may find an intentional or unintentional mention of your lie really insulting. 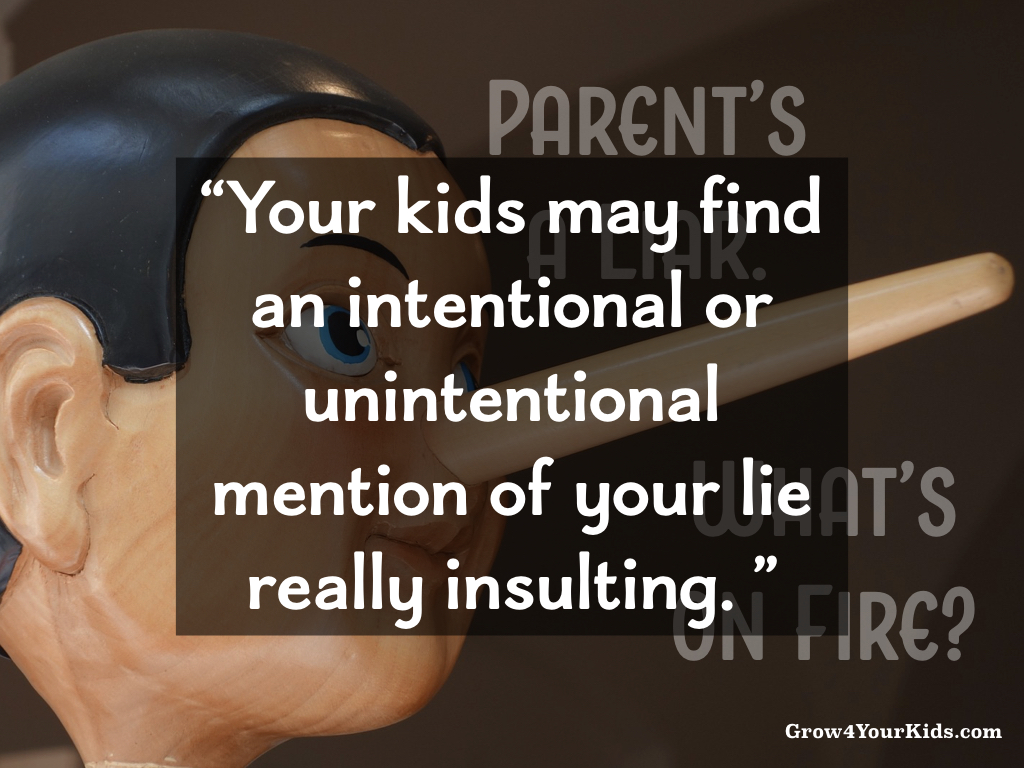 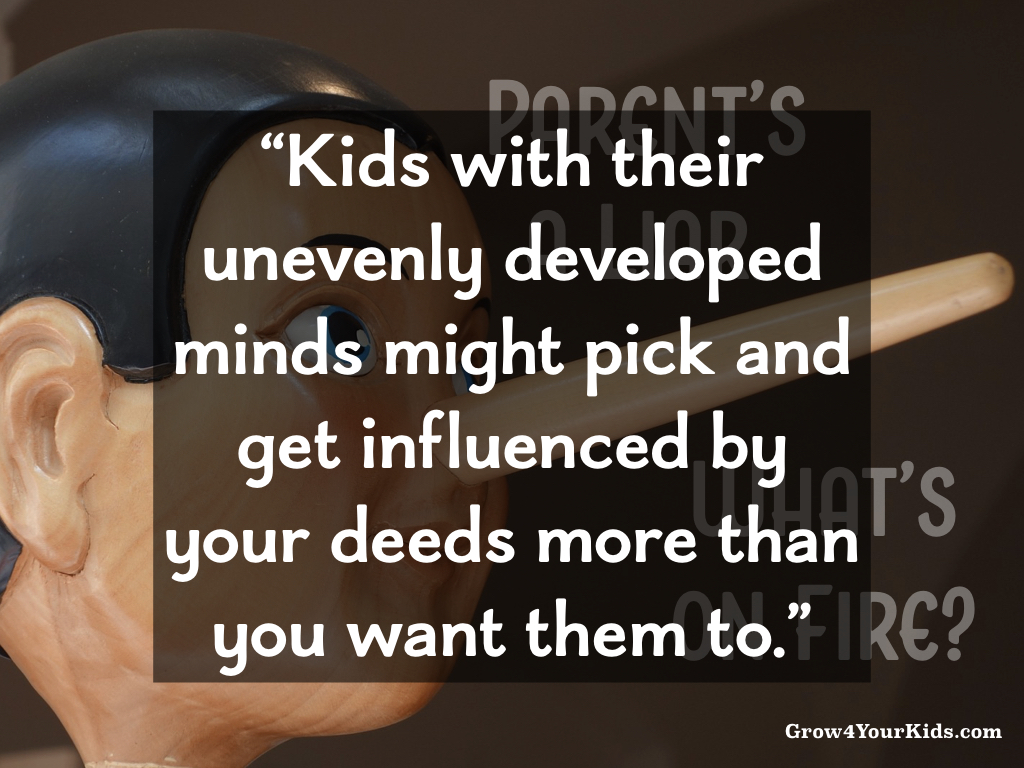 Premium Fonts for Free @TheHungryJPEG.com -- Only for a limited Time!

Also @Pixelo.net Hurry Up, Grab them before they are all gone!

Scenario 5: Tom ran a small business from home. His child observed him all the time when Tom lied from between his teeth about his the level of his success, numbers of orders he got, etc. on phone. According to Tom, such show off was important to impress clients. Years later, when Tom sent his son abroad for higher education, he was expecting a great job so his son could pay off all the debt which he got into for his education. But he was aghast when the young man returned home without as much as an offer letter. After all, all these when he was studying, Tom kept asking his son about the job prospects, the possibilities and his son always assured him with sound stories of ample opportunities. Turned out that the son was simply practicing what he had picked while growing up listening to his father’s fibs.

Scenario 6: Monica, who was in VII grade, was told by her tutor to search for and write the meaning of a few words. When her notebook was checked, some of them were completely wrong. When she was asked, she claimed to have consulted a dictionary. Despite her mom’s claims that she has not seen her with a dictionary recently, Monica kept on insisting that she can simply not find that dictionary, and has indeed copied the meaning from it. In reality, she had just scribbled something on her own. But she thought, why own it up just yet? Maybe the dictionary wouldn’t be found after all, and she would be saved from all the scolding.

Actually, Monica used to see her mom lying all the time, and might have picked the usefulness of not being truthful.

What we can learn from the above incidences is that kids with their unevenly developed minds might pick and get influenced by your deeds more than you want them to. If they start lying to you, it is not just about being wrong morally or ethically, it could be really dangerous for their own well being too. Imagine your child who has become a master of lies which you can’t catch turning to a bad, dangerous habit. We will really be in a fix.
No Guilt Anymore

Let’s continue the above Scenario and see what happened to the special dictionary.

Scenario 6: (contd) The dictionary was found. Monica still didn’t confess and went as far as looking for the word. Once she was on the right page, the tutor pointed out the word and its correct meaning. Monica was now speechless but didn’t look guilty, and the tutor was really concerned.

In this case, Monica thought it is alright to lie to save her skin by telling a little lie. If surrounded a web of too many little lies, children might begin to think it’s absolutely okay to tell tales and that there is nothing to feel guilty about. Gradually, it is not just lies, but all other wrongdoings — children start to shelter themselves from the uncomfortable, suffocating feeling of guilt.

More often than not, the weight of guilt after doing something wrong is the most effective teacher when it comes to lessons of life. By exposing them to our world of deceptions, we might deprive our kids of this shapeless mentor.

To conclude with a positive note, let’s talk about another set of parents.

Scenario 7: Brad and Lena were always careful to not lie to their kids. They didn’t make empty promises and apologized if they couldn’t keep a promise even after trying the best. As a result, the kids respected the notion and seriousness of promises. This couple never had to present a proof to their growing kids, a simple reminder, “You know I wouldn’t lie to you”, sufficed. Needless to say, that the kids flourished under this nourishing environment of trust and respect.

We hope that parents who read this will be more careful with their conduct in front of their kids. Happy Parenting. 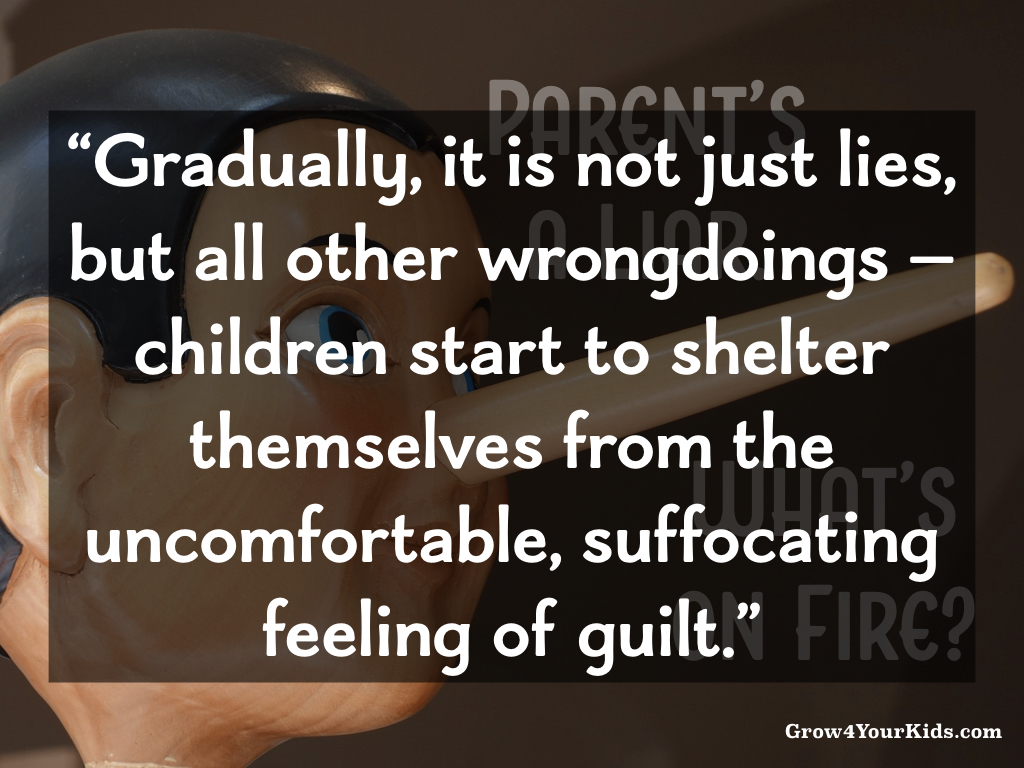